The term "miniature oil lamp" is of relatively recent vintage. Originally, these fascinating little lamps were called "Night Lamps" by their manufacturers. Their function was very similar to a "night light" in today's electrical home - a low-level light source intended for a bedroom, hallway, or bathroom. In fact, the earliest of the "night lamps" contained only enough fuel to burn through the night.

As kerosene became widely available and the number of glass companies proliferated in the later part of the nineteenth century, so did the variety of miniature oil lamps. Function also changed as miniature lamps now were used as accent light or mood lighting. From a simple utilitarian purpose, lamps became very decorative. A wide range of glass and metal materials were used, including high quality art glass lamps, now very much sought by collectors. 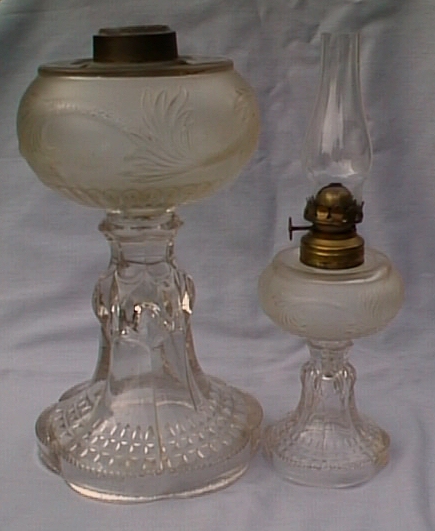 Only a very few of the lamps we call "miniature" today are actual miniature versions of full size lamps. An example is the frosted font "Teardrop and Eyewinker with Plume Font" lamp produced by the Dalzell glass Co. of Findlay, Ohio. The mini version of this lamp is shown in Smith I, Fig 114. Dalzell made other true miniatures including the Queen Heart (we now call the Sweetheart lamp), the Crown, and the Octavia. Another popular true miniature lamp is the Cosmos, made by Consolidated Lamp Co. of Fostoria, Ohio.

What size of lamp can be called miniature? There is quite a bit of debate as to where miniature ends and where the next size, called Junior lamps, begins. Some collectors use burner size, others prefer total height of the lamp, perhaps no taller than 10". One definition that is popular with many collectors is that a miniature is any lamp not intended to produce enough light for reading.

Whatever your definition, these little lamps are a beauty to behold and a joy to collect.